Hello fellow Drynorians! We are still on the road, we originally planned to return home today, but because of ShySeel’s medical complications we can’t return home yet.

As you may know, we participated in an expo and opened up a stand. Expo went great, many people played our game(even though the gaming part of the expo was pretty small and there weren't many people), Kingdom Lost was the only playable game and many people enjoyed it, giving us lots of feedback, which was highly motivating and productive for us. 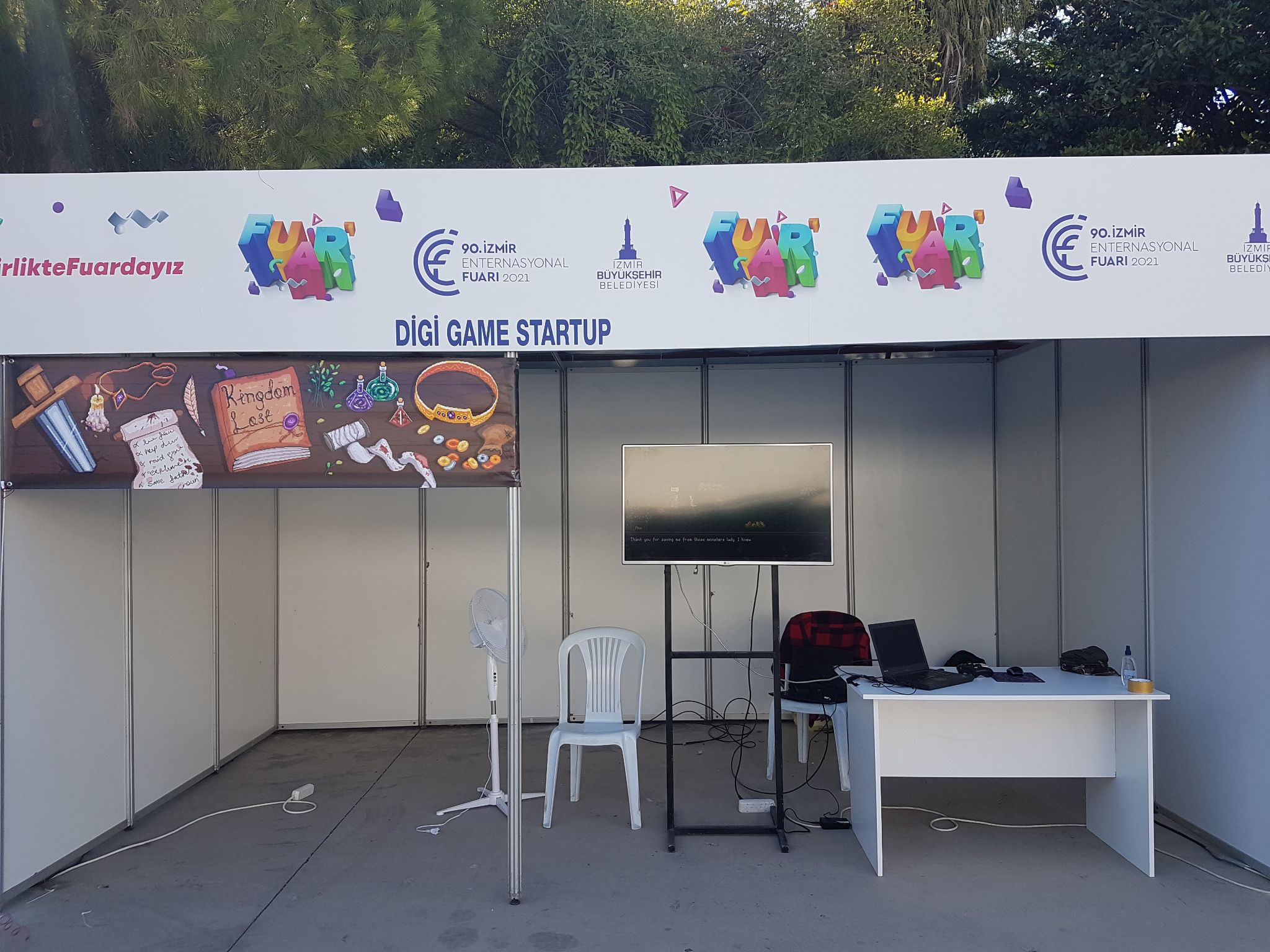 We didn’t really know what to expect, especially since this is a first for us and COVID thing is still going on. ShySeel completed the banner in the night and we printed it just before we opened up the stand. I also wish we had printed some business cards to hand it to people since lot’s of people asked how they could find our game online(luckily, the first search result when you google Kingdom Lost is our page). We had some issues with gamepad controls and I fixed it at night for the next day. Since most players kept getting lost in the forest, I changed the layout of the map to guide the player better. I also noticed that people who are used to console games kept using trigger buttons to run, I’ll probably make R2/RT run and give access to the map similar to character and inventory panels. Also I solved the issue with generic controllers not working(I wasn’t aware of it before), though I still need to make controller keys remappable and add number sprites in addition to PS/XBOX button sprites to make it fully compatible.

We went there as finalists for a competition organized by NextInGame, but since jurys were mostly investors without any real interest in gaming, it was a complete shitfest. I did expect this outcome since most of the questions were about our financial plans for the game, instead of the actual game itself, I got mad and deleted all those questions in the form they sent us. Also considering how popular the hyper-casual genre became here, we weren’t really there to win(though we would if they were actually looking for a piece of playable software with any actual value besides making kids watch ads). But we met some great people and got lots of feedback in the process, so it was definitely worth it.

I’ve been pausing our Patreon for a while which started with ShySeel’s hiatus but didn’t end with her return. I continued doing so because I couldn’t give anything to our supporters for a while even though I was aiming for monthly updates and I felt bad about it. Currently, I don’t plan to pause our Patreon anymore since we have been working on the game for the past several months now and there is also a playable alpha version in our Discord server to show our progress. Donations through both Itch and Patreon are welcome so please feel free to choose whichever suits you the best.

As for the monthly updates; I don’t think this kind of approach is best for us, since I keep making unplanned changes. I mean they are mostly planned content wise, but I also keep working on the game engine while adding content which can create unexpected workload and it’s much more time consuming then adding the actual content. As you’ll see with the upcoming update, tons of things have been changed and new things are added. It's a huge update on the technical aspect and I hope it’ll also feel that way when you play.

As for the current state of the upcoming update; I didn’t have much time to work but the cutscene debug system I was working on is complete now. It checks for most of the issues cutscenes and dialogues can have(it’s not fool proof since there are some specific elements like somethings can depend on the current map), but it mostly gets the job done, reducing the time I spent on debugging by a lot. So with that out of the way, I made some changes to the forest map as I mentioned before and made some modifications to the encounter system to make it a lot more accessible to players. Enemies now chase you when they notice you, similar to open world JRPG’s, though they currently lack run animations(most of them were going to get a revision anyway). So the only missing part is Dianna’s quest that we actually meant to commit this update to. The dialogues and script are mostly ready and I’ll implement it when I return home. I didn’t have any time to test the changes I made so after testing it, I’ll release the new version.

About ShySeel’s condition; since it’s not a common illness, we had to travel to another city to see a doctor for ShySeel’s condition(keratoconus) and we’ll stay here until the next appointment 1 week later, then the doctor will decide whether or not she needs surgery. I’ll keep you updated, see you next week.